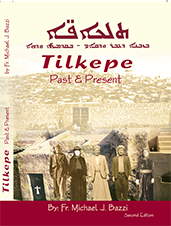 This book contains original research done by Father Michael Bazzi in the town of Tilkepe, located in northern Iraq. Tilkepe is at a similar latitude to Carmel Valley in Central California, and just as beautiful and rural.

Professor Bazzi uses empirical data to describe the town, culture, customs, health care and religious beliefs of this town, which up until the 1960’s, was over 93% Christian. Using research gathered from the local Chaldean families, the author reveals the heritage of a modern community whose roots trace back to humanity’s earliest civilization.

Originally published in Arabic in 1969, father Michael’s book is more relevant than ever given the events taking place in the Middle East today.

There are no reviews yet.

Be the first to review “Tilkepe Past and Present” Cancel reply